Newcastle Advance Fire and Security Diamonds in association with SecuriCorp 47
Berwick FTS Bandits Powered by Keenwood Karpets 42
SGB Championship
Pic Colin Poole
Following the 54-36 defeat at the hands of the Berwick FTS Bandits Powered by Keenwood Karpets the night before, the Newcastle Advance Fire and Security Diamonds in association with SecuriCorp welcomed the Bandits to Brough Park yesterday afternoon in the Championship looking for local derby revenge and after more than three hours of hard battling and injury, the home side got their first league points of the season on the board, but the Bandits fought hard all the way to the end, a man down after Heat Two.
Berwick’s Leon Flint was covered by rider replacement after falling the night before when celebrating with teammate Theo Pijper, while Bradley Wilson-Dean was covered by Newcastle by guest replacement, Kyle Howarth.
Heat One was a straight 3-3 won well by Chris Harris ahead of Matthew Wethers and guest Kyle Howarth, however Heat Two came to an unscheduled halt on the fourth bend when Ty Proctor got well out of shape and clattered into the air-fence and took George Congreve down as well, with the Bandit excluded from the re-run once the fence had been repaired. Further delay came when it was discovered that to get a county ambulance in would take an exorbitant about of time, so the track ambulance took Proctor to the RVI, returning once his transfer had taken place in the city. The good news came later that Proctor had not suffered any fractures, a big relief for the Berwick fans.
The re-run which started at 5.30pm, 90 minutes after start time, saw Kyle Bickley hit the deck on the first bend necessitating a second re-run of the most extended heat in decades, in which George Congreve straightened up at speed on the fourth bend and t-boned Bickley bringing both down. Congreve was excluded and the race awarded a 3-2 to the Diamonds, but thankfully both riders were fit and well, the score now 6-5.
James Wright and Max Clegg made light work of Jye Etheridge and Theo Pijper in Heat Three’s home 5-1, while Berwick pulled two back in Heat Five with a 2-4 won well by Harris over Wright as Clegg fell when well to the rear on the last lap to be excluded with the result awarded score now 16-13. Heat Seven saw Wells in as the R/R ride for Flint having just won Heat Six but found himself in third place behind his partner Pijper as Starke went away to win well in the shared 3-3, taking the score to 22-19.
Wethers motored hard behind Etheridge in Heat Eight, getting right up with the Bandit on the third lap and just missing the win, well deserved by the Bandit in another 3-3, maintaining Newcastle’s three-point lead, 25-22 before Wells gated hard in Heat Nine to lead well on the first bend chased well by Clegg who was right alongside him off the second bend of the second lap. Wells hung on and shared the race again.
Wells came in as a tactical substitute in the 11th for Etheridge but ended up at the back, hitting the gas hard to chase Complin and passed him on the second lap, but had to defend hard to keep his point as Harris took the win over Starke in a Bandits 2-4, the score now 35-30. Bickley shocked the stadium by gating hard and leading Heat 12, chased by Complin who was then passed by Pijper to form an unexpected Bandits 1-5, Wright at the back which brought the teams to within one point, 36-35.
Harris ended Heat 13 at the back as Howarth took the win in a home 4-2, to now put Newcastle three up with two heats to go, but Bickley took a third over Complin in the 14th as Pijper chased hard behind the leading Clegg in a 3-3, and with one heat to go, the score was 43-40, leaving Berwick the task to get a 1-5 to steal victory from the Diamonds.
Starke and Howarth led in the last heat, but Harris hit the gas and raced wide and hard to take second and almost take the win, but Starke’s win and the home 4-2 gave the win to Newcastle 47-42.
Newcastle’s Dave Tinning said: “We had to work so hard for this win tonight, a win which has finally given us points in the Championship table helped along the way by a guest who can score us points! Thanks to Kyle Howarth for his excellent efforts! Paul Starke also had a night to be proud of with his 12 points. We’re getting there, albeit slowly and surely, but bit by bit, we’re getting there.”
Gary Flint, Berwick’s team boss said: “This was a tough night on Tyneside tonight, very hard going and very hard work for us. We witnessed some huge crashes on a tricky surface but, the Bandits battled on to claim a league point. A big win, some dramatic spills and an away point rounds off another weekend of Speedway action and as always, we will keep everyone posted on Ty and Leon’s progress.”
Individual Riders’ Score
Newcastle Advance Fire and Security Diamonds in association with SecuriCorp 47
Kyle Howarth (guest) 1*,2,3,3,1 = 10+1
Matthew Wethers 2,1*,2,2* = 7+2
James Wright (c) 3,2,1*,0 = 6+1
Max Clegg 2*,Fx,2,3 = 7+1
Paul Starke 3,3,2,1,3 = 12
Lee Complin (r) 3,0,1*,0,1,0 = 5+1
George Congreve (r) Fx,0,N,N = 0 withdrawn injured
Berwick FTS Bandits Powered by Keenwood Karpets 42
Chris Harris (c) 3,3,3,0,2 = 11
Jye Etheridge 0,1,1,3,Ts = 5
Rider Replacement (Leon Flint)
Theo Pijper 0,2,1,2*,2 = 7+1
Ricky Wells 2,3,1*,3,1,2,0 = 12+1
Ty Proctor Fx,N,N,N = 0 withdrawn injured
Kyle Bickley (r) 2,1*,0,0,0,3,1* = 7+2
Luke Crang (Number 8) 0 = 0
Written by
Lawrence Heppell 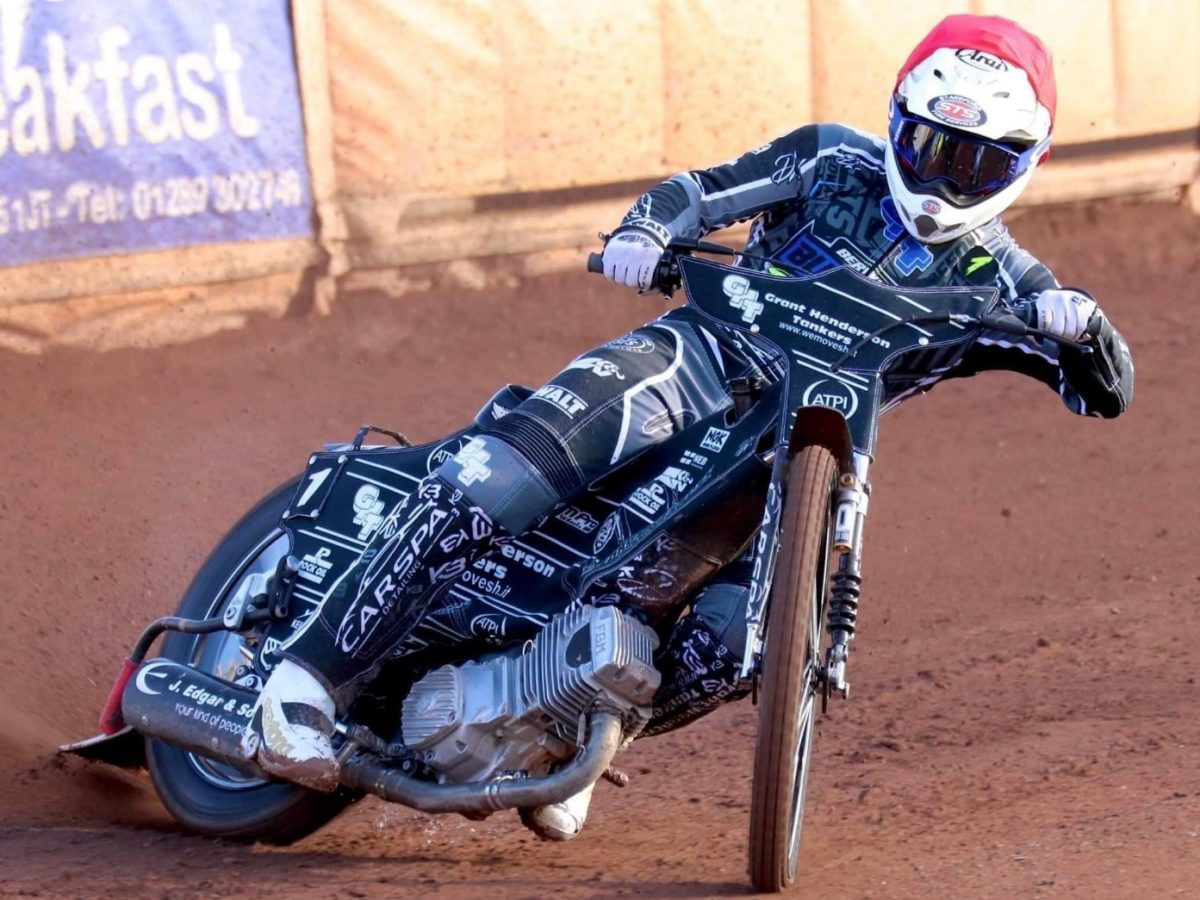 PIRATES VS. BANDITS POSTPONED. Next up – The Bullets! 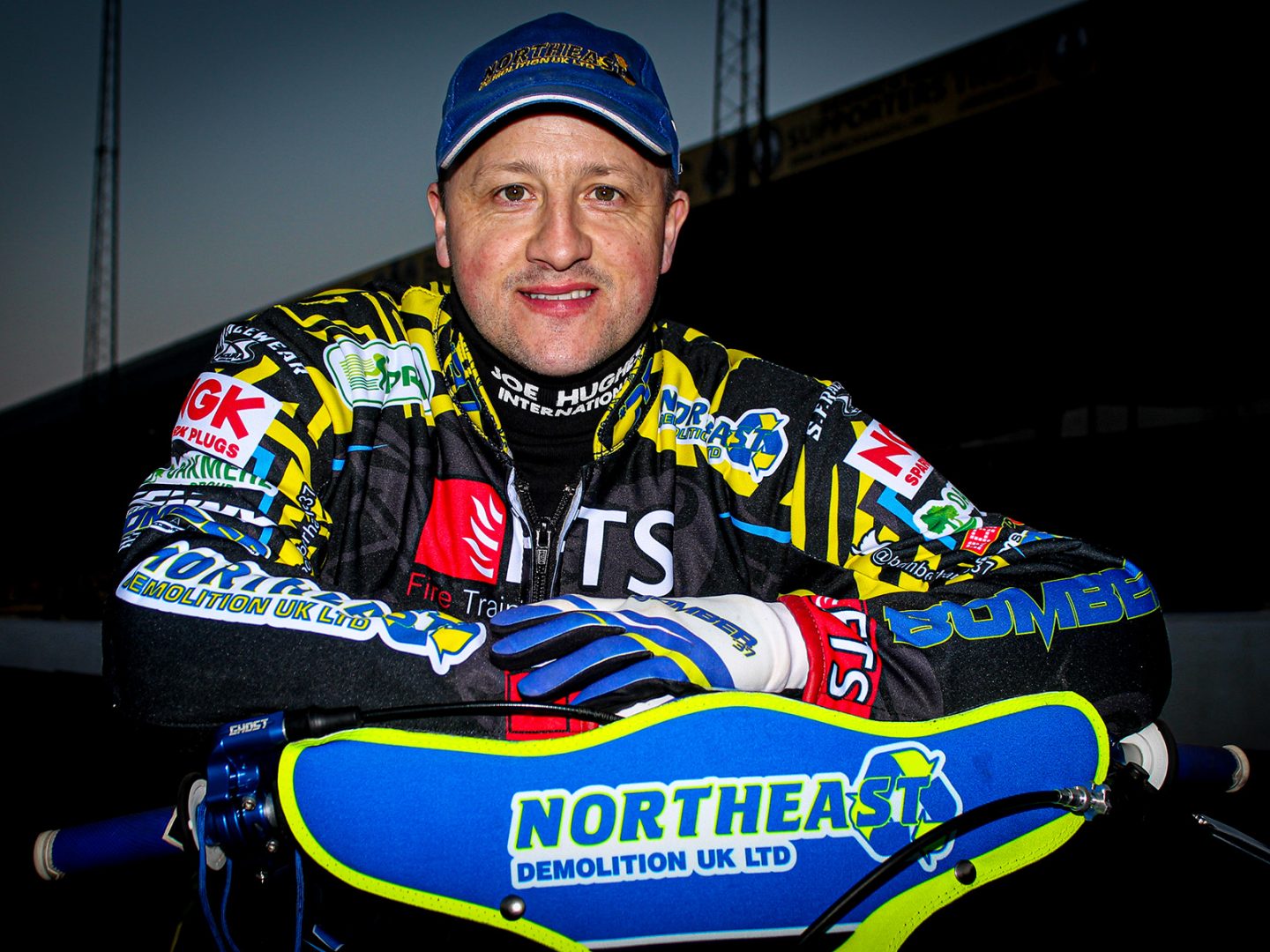 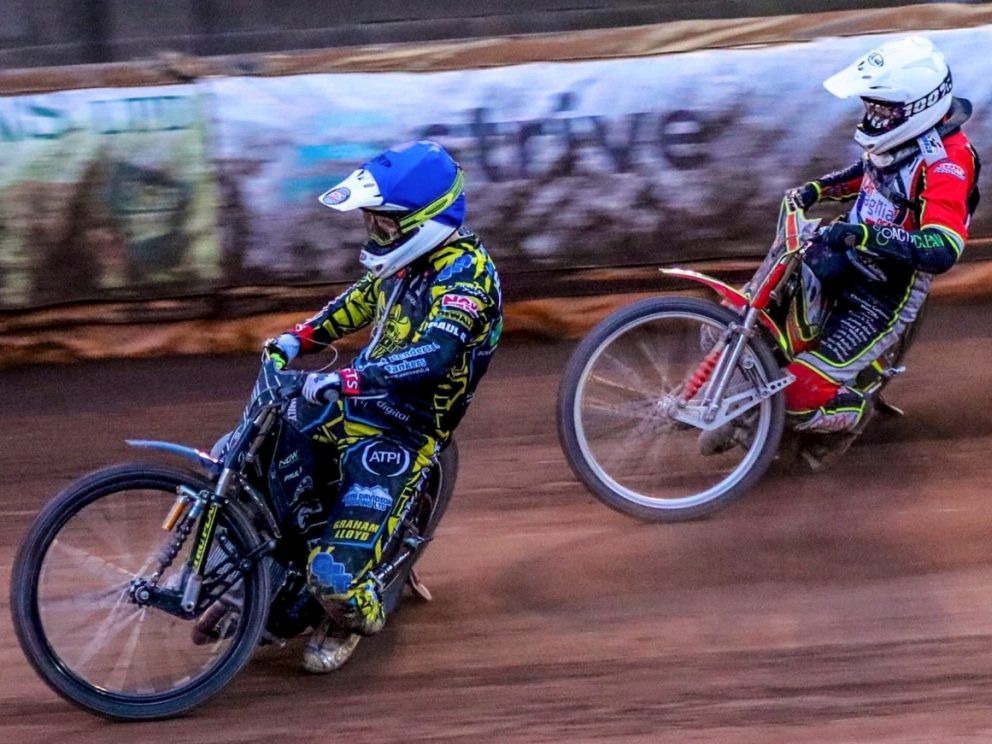 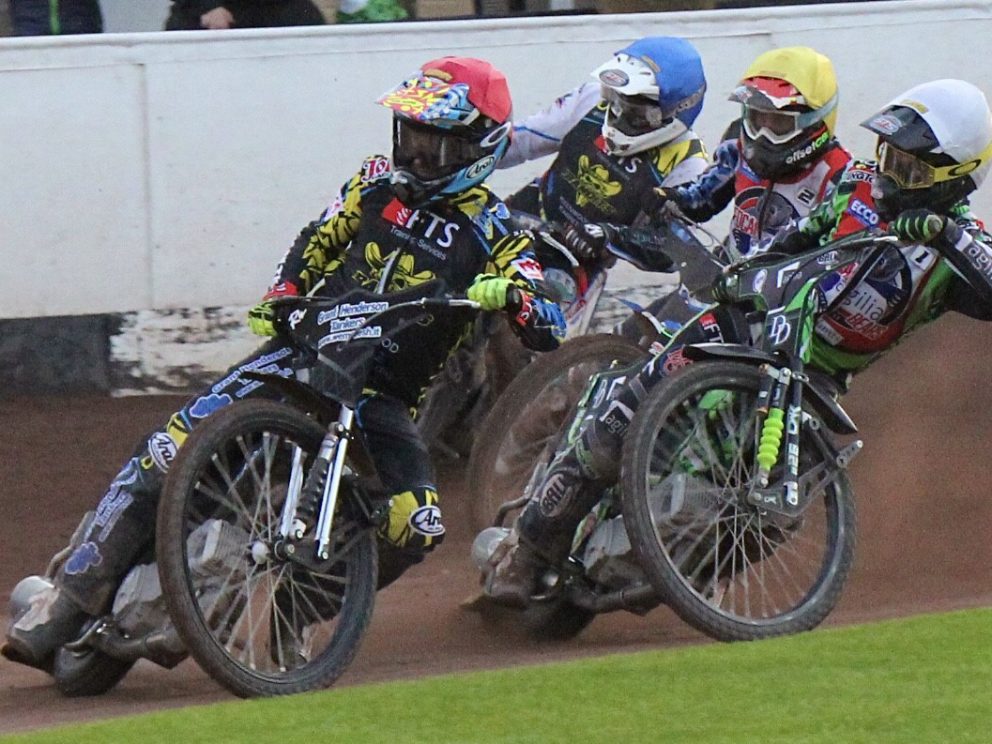 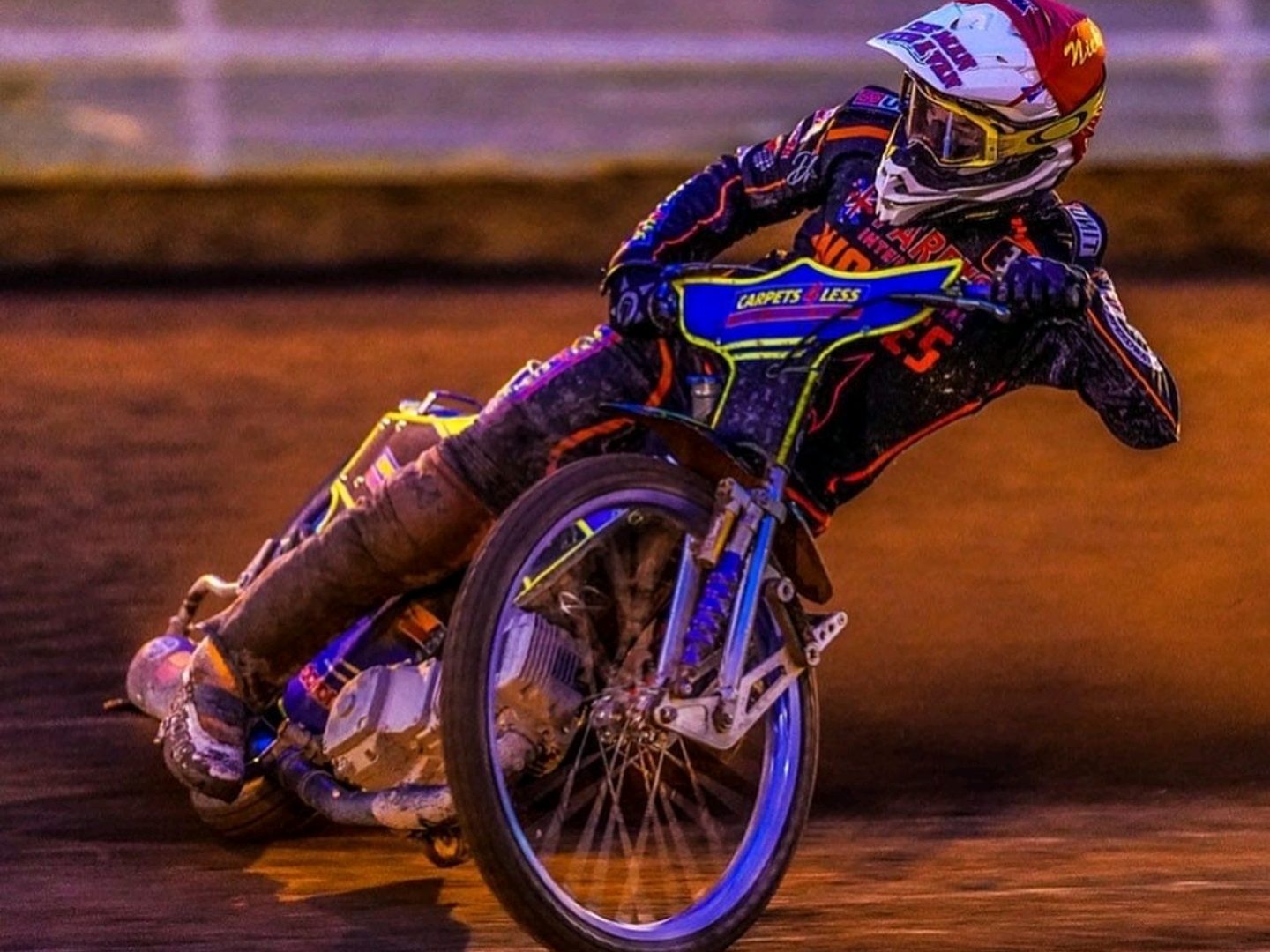 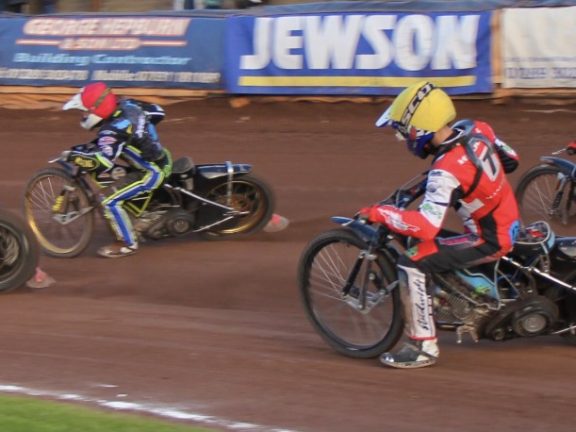