Both sides are awaiting missives from officialdom before confirming their line-ups for the first act in another Shielfield Super Saturday.

For the Berwick FTS Bandits, powered by Keenwood Karpets, it revolves around the continued delays with issuing Danish signing Jonas Knudsen’s work visa. Efforts by the club and the town’s MP Anne-Marie Trevelyan are on-going to push through the application which has now been with the United Kingdom Visas and Immigration department for over eight weeks.

Former World 250CC champion and Speedway GP2 competitor Knudsen managed to get an impressive run of scores under his belt for the Bandits while using a Permitted Paid Engagement Visa. That allowed him to race in Great Britain for 28 days but ran out following the home meeting against Edinburgh on July 23. Under current UK immigration law a PPEV can only be issued once and is not extendable.

“We are in the hands of the UK immigration authorities,” club co-owner Jamie Courtney admitted. “When the application was made we were told that, among other things because priority was being given by UKVI to those fleeing the war in Ukraine, the processing time for applications was up to eight weeks.

“We are now beyond what we were led to believe would be the maximum waiting period but, as we speak, Jonas is ready and keen to face the Gladiators on Saturday and Birmingham next Wednesday but without a visa he is stuck in Denmark.”

With Berwick’s National Development League side also in action on Saturday night Redcar’s Jordan Jenkins is on standby to fill the number six racejacket which Greg Blair, who guests for Kent at Belle Vue on Friday night, wore against Glasgow last week.

A switch in the Berwick riding order sees Leon Flint and Ricky Wells swap places with the teenager slotting in at number four.

“Leon has done superbly well with the added pressure that comes with being number five but this move is all about maximising the team’s scoring potential with a series of meetings coming up which could very well be settled by the odd point one way or another,” team manager Gary Flint explained.

“We have four meetings left to race, three against teams currently battling to reach the play-offs – including Plymouth. “That’s up to 14 league points available to us which would take us to 28 points. Currently the team in the sixth and final qualifying place is on 23 points.

“There really is still a lot to race for – but we have to start winning, home and away.”

Opponents Plymouth currently sit fourth in the table despite a season blighted by injuries, their problems added to by a failed pre-meeting random alcohol and drug test by Barker at Oxford last week.

The former Berwick number one is currently suspended pending the testing of a second sample. He is named in Saturday’s provisional side but his appearance on Saturday would need to be cleared by the Speedway Control Bureau. The Gladiators used a guest for Barker during Tuesday night’s narrow victory over Birmingham which maintained their unbeaten Championship home record this season.

Danes Michael Palm Toft and Hans Andersen are set to return from injury for the northern tour – which also takes in Edinburgh on Friday night – but Edward Kennett continues to be missing as the result of an arm injury aggravated in Plymouth’s first meeting of the season.

Plymouth’s NDL team, the Centurions, has been equally ravaged by injury – most notably to Dan Gilkes who was in superb form before a huge crash during the Championship team’s victory at Scunthorpe left him with multiple arm and rib fractures.

With fellow Championship reserve and NDL heat leader Henry Atkins leaving the club seemingly in a dispute over restricted racing opportunities for the Gladiators, they have struggled for points after thrashing Belle Vue Colts in their league debut.

The experienced Adam Roynon – whose father, Chris, rode for Plymouth in the 1960s – has re-joined a club he has enjoyed two previous spells with but is missing on Championship duty with Scunthorpe at Leicester on Saturday.

The Bullets, who make the long trip to Devon for the reverse fixture on Tuesday night – can all but rubber-stamp their play-off qualification with a win on Saturday. They welcome reserve Kieran Douglas back after missing their last match due to injuries picked up in the KO Cup semi-final at Leicester. It’s a busy day for the Centurions who are also in action against bottom of the table Armadale on Saturday, the clash with the Devils starting at 3pm.

The double header begins at 6.30pm with advance tickets, which allow accompanied children under 15 years to be added free, available from berwickspeedway.com/tickets 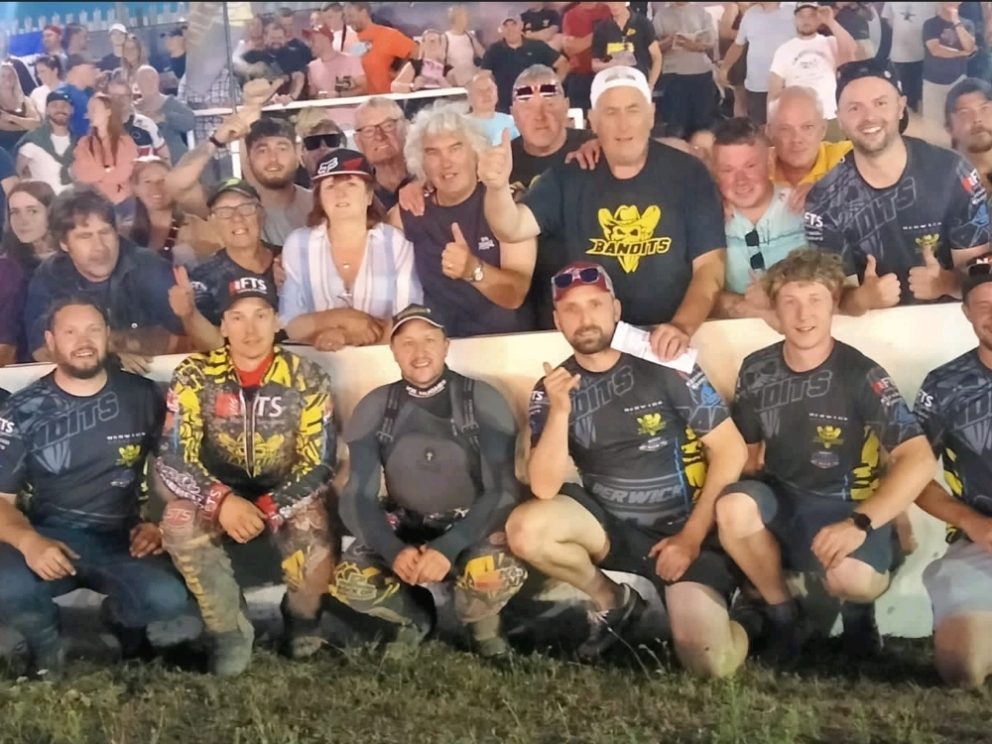 Despite a spirited effort from Chris ‘Bomber’ Harris and Jye, your FTS…