The Berwick Bandits have proudly held their place as the most popular spectator sport in the Borders and North Northumberland since the club was established in 1968 by Danny and Liz Taylor.

Professional Speedway racing has brought thrills and spills, created heroes and villains and brought joy and entertainment to the good people of Berwick and surrounding areas for over 50 years.

Berwick Bandits have had an exceptional list of characters and superstars represent the club over the years and heroes such as the Templeton brothers, Graham Jones, Jack Millen, Wayne Brown, Steve McDermott, Rob Grant, Bruce Cribb, Mark & Sean Courtney, Kelvin Tatum, Jimmy Nilsen, David Meldrum, Scott Lamb, The 3 Czech’s Rymel, Makovsky & Franc, Sebastien Alden, Ricky Ashworth & most recently Kevin Doolan are amongst hundreds of stars that have thrilled the crowds and blazed a trail behind them that only the term “legacy” correctly sums up.

A host of visionaries have guided the club through trials and tribulations since 1968 and most recently Berwick natives Scott & Jamie Courtney have successfully kept the Bandits dream alive alongside former Rider Gary Flint, Steven Dews and the volunteers that work countless hours to ensure Speedway exists in Berwick-Upon-Tweed.

In 2021 the Berwick Bullets were added to the Shielfield Park family, joining the National Development League and finishing runners-up to Mildenhall in their debut season.

Hard work, passion, community and dedication have kept the Bandits punching well
above their weight and the homegrown, family feel of the club plays a big part in making Saturday nights at Shielfield Park Stadium a very special place to be! 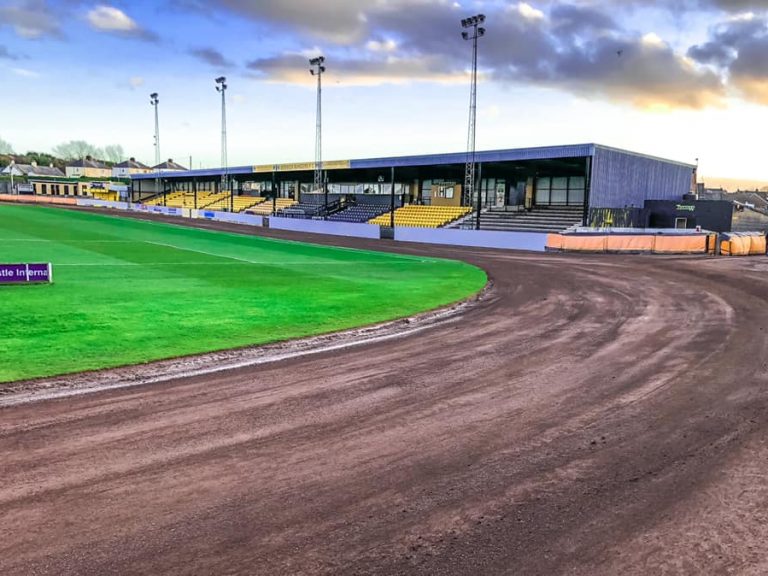 The current capacity of Shielfield Park is 4,099, of which 1,366 are seated in the Main Stand. Opposite the Main Stand is a small covered terrace, nicknamed the “Ducket”. Both of the ends are turfed adding spectacular viewing areas for speedway.

The stadium gates open at 6:00pm, with a parade of the riders at 6:50pm and the racing itself commences at 7:00pm.

Covered all seated grandstand on home straight.
Covered terracing on back straight.
Elevated viewing on 3rd bend (grass banking) - best view in speedway.
Quality club own in-house catering supplying usual burgers, pies, snacks, hot and cold drinks etc etc, now based in purpose built area on first bend, to left on entering turnstiles near First Aid Post.
Back Straight Tea Bar - supplying pies, snacks, hot & cold beverages.
Track Shop - fully stocked with Bandits and Speedway Merchandise situated in same area as new purpose built catering section on first bend.
Bar - fully licensed outlet selling a variety of beers, wines, spirits and soft drinks, situated at the rear of the main grandstand.
VIP Hospitality Suite - Glass fronted seated viewing area and lounge for meeting sponsors and guests to relax, complete with buffet and complimentary drinks.
Toilets situated at turnstile area, at the rear of the main stand, and also on back straight.
Black & Gold - situated behind the main grandstand, this licensed bar and function room is open to supporters both prior to meetings as well as after the conclusion of the racing.
First Aid Medical Services